Where is Curves Advertising Money Going? 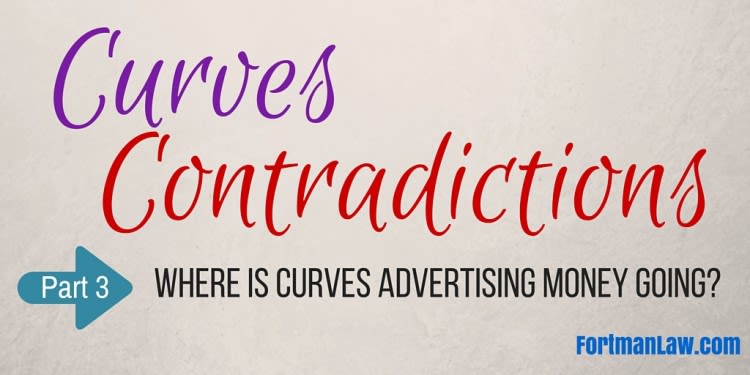 Welcome to post #3 in the Curves Contradictions series. This series focuses on exposing the contradictions we have caught Curves in throughout our case research.

Part of being a franchisee means paying into an franchise advertising fund. The fees each franchisee pays are meant to go towards advertising organized by the franchisor (typically on a regional and/or national level) which in turn will help bring customers through franchisees’ doors.

Over the years, Curves franchisees have seen the advertising fees deducted from their accounts each and every month, but what have they truly received in return? For many years, months would go by without any television, radio, or even print ads being seen by franchisees who were desperately searching for them, much less any potential customers.

At a Curves conference in late 2014, Curves CEO Monty Sharma attempted to explain and justify the use of the advertising funds. He stated, “We collect 3% of our monies from you, from your fitness members, and your Curves Complete memberships. We then, as shareholders, add to that and total about 7 and a half million dollars, that’s what we think we’re going to do this year.”

He attempts to paint Curves as a the oh-so-generous franchisor, but then admits to the failure of the 2014 ad campaign, “Now what has offset some of these gains has been our declines in Curves Complete. We have struggled with Curves Complete, as you know, all year, driven through the computer system challenges and also through us putting all our money into the Jillian Michaels program. We took all our advertising dollars and all the materials we develop essentially and put them behind Jillian.”

He also eludes to the past issues of franchisees complaining that no one is seeing any ads, “So in January, you won’t be calling us, if you join, or take this opportunity. I don’t think you’ll call us or call Mike asking ‘where are Jenny Craig ads?’, you’ll see plenty of our ads.”

He promises lots of ads, but once again, ads that will benefit a very specific few. In 2014, all the ads (while limited)were focused on Jillian Michaels, leaving clubs that didn’t offer the Jillian Michaels program to fend for themselves. In late 2014, after Curves merged with Jenny Craig, Sharma made it clear that advertising money would be shifted to Jenny Craig, which, many Curves franchisees argued, was a diet program that was in direct competition with the Curves Complete program, something that Sharma had just admitted was already struggling. Implementing Jenny Craig was also a costly endeavor that many franchisees simply could not afford due to the financial struggles of the past years. Once again, Curves was controlling the advertising dollars in a way that made it so franchisees either had to fork out the money for expensive upgrades, or simply not benefit from advertising whatsoever, even though the fees would continue to be collected from them.