Gary Heavin: Man of God or Man of Money? 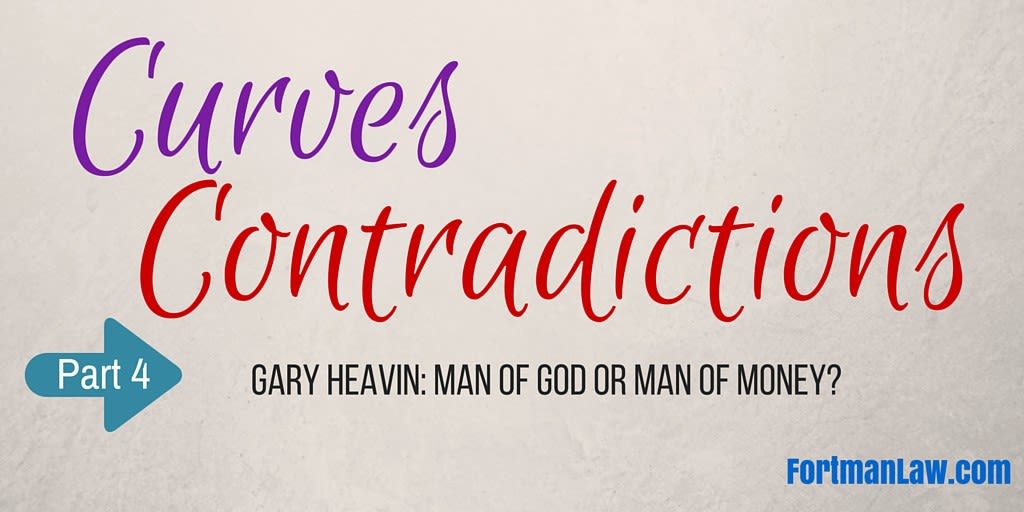 Welcome to post #4 in the Curves Contradictions series. This series focuses on exposing the contradictions we have caught Curves in throughout our case research.

The founder of Curves International, Gary Heavin, claims to be a born-again Christian. After becoming a millionaire who landed himself in bankruptcy and then jail, Heavin described his “born again moment” during a 2003 interview on Pat Robertson’s The 700 Club. “I finally got on my knees and said, ‘God, I lived the first half of my life by my will, and it’s a mess. I’m going to turn the rest of my life over to you.”

Many franchisees were drawn to the Curves franchise because of Heavin’s beliefs and Christian, family-like attitude. But are his actions truly Christian? You decide.

In an interview with Inc. Magazine, Heavin stated:“It’s kind of like Moses in the Bible,” he says. “Ispent 10 years in Egypt, which was the old health club business. And then I spent 10 years in the desert; I was a consultant, I was in the equipment business, I traveled around. And then at age 40, it all just came together. Everything we tried, worked. We entered into the Promised Land.”

In the same interview, Gary Heavin explained that he didn’t believe in charging franchisees more just because they were successful. The article quotes an early Curves franchisee who left the Subway franchise due to this issue:“In most franchising arrangements, franchisees pay the franchiser a franchise fee at the outset (at Curves, the current fee is $39,900; opening a Subway franchise, by comparison, can cost more thandouble that amount), plus a percentage of sales, on a weekly or monthly basis. That’s how it worked at the Simses’ Subway franchises. “The more you make, the more you pay,” says Amy. “It’s very, very frustrating. Your hard work is paying off and you’re making money, but you’re also giving a lot of it to them.” To Heavin, this made no sense. Not only does it serve as a kind of tax on successful franchisees, it creates bad blood between the franchisee and franchiser. “You tend to become adversaries over the issue,” Heavin says. He decided to cap the monthly 5 percent royalty–it’s currently $795 in the United States. “If they do fantastic, bless ’em,” Heavin says.Heavin may have capped the royalties, but he also required all franchisees to purchase several different Curves products over the years including meal and snack bars, Curves apparel, and specific display stands for the products. Franchisee complaints about losing money on the products and being unable to sell out of one bundle before being forced to purchase the next fell on deaf ears. Franchisees that refused to purchase the bundles were threatened with being removed from the Curves.com website. (See Curves communications with these threats here)

Did Gary Heavin truly believe that was the Christian thing to do?

Also in the Inc Magazine interview, Gary claims he always aims to do the right thing every day:“For a lot of people in my position, the position defines who they are. For me, I was as happy flat broke as I am flying my Learjet. I don’t define myself by my quarterly profits. I define myself as a child of God that’s been created in His image for eternity. If that becomes your defining image, there’s extraordinary power in it.” He pauses for aminute. “I’m not afraid of losing my money or my business; I’m going to wake up every day and do the right thing. And if I were to lose everything I own, I’d just rebuild again.”

Gary Heavin may not fear losing it all, but what about his franchisees? Many franchisees found themselves unable to turn a profit and being forced to put their personal savings into the business just to keep their doors open. When they had depleted their savings and were forced to close their franchises before their agreement was up, they were slapped with huge early closing fees and threats of lawsuits if these fees were not paid.

Take a look at a typical letter sent to any franchisee that closed early: 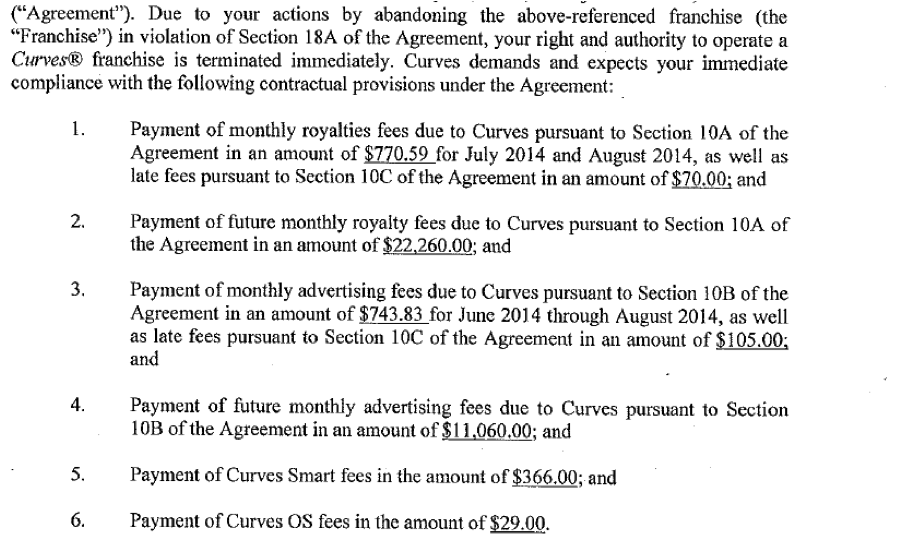 Was Gary Heavin Christian and generous when his franchisees were financially destitute?

In an interview with 700 Club, Gary discusses his wealth.“LISA RYAN (reporting): He flies his personal jet, his helicopter, and his hot air balloon. His next-door neighbor is President George Bush. This ranch in Crawford, Texas, is what he calls home. Earlier in the day, I met Gary just as he was returning from a whirlwind tour to promote his bestselling book.GARY HEAVIN: It may seem like an extravagance, but when you have 5,000 locations in 50 states and nine countries—it [having your own plane] is a necessity. It gets me back in time to be with my wife and 9-year- old daughter.”

The bestselling book tour mentioned in the interview was for Gary Heavin’s book, Permanent Results Without Permanent Dieting. As soon as he came out with this book, Gary Heavin made it a requirement for every single Curves franchisee to purchase at least 1 case of books for $150 per case. He then ran an advertising campaign that promised new Curves members a free copy of his book, which forced the franchisees to simply give away the books they were required to purchase.

Does forcing your franchises to purchase your book in an attempt to get on the Best Seller’s list sound like Christian humility?

Gary Heavin defines himself as “child of God that’s been created in His image for eternity.” Do his actions match his words?